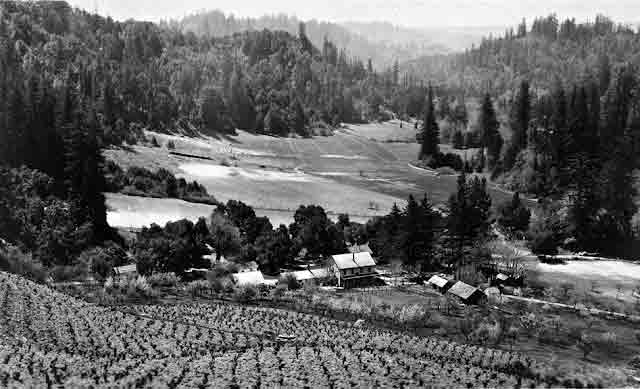 View of Summer Home Farm
Three miles south of Glenwood along Bean Creak Road (former County Highway) in 1923
I have a painting of this view painted by someone who visited there during this time period.

History is important and it is incredibly sad to see it disappear only to be seen in old photos and memories.  Last week, Big Basin State Park, filled with ancient redwoods and historic buildings, became a victim of the ongoing fires in Santa Cruz County, California.  Most of the redwoods, with their fire resistant bark, will survive for future generations although even some of them were lost.

As the fire moved further south, Scotts Valley has been ordered to evacuate.  And there is history that I hope will not be lost.  My husband, Ron, spent the first eight years of his life, in Scotts Valley before the family moved to the city of Santa Cruz.  His grandparents, George and Ida Reid, and his parents, Roy and Beatrice Reid operated Summer Home Farm on Bean Creek Road from 1919 to 1946.  It was a resort in the midst of towering redwoods that people from San Francisco and elsewhere rode the train to the nearby station at Glenwood to vacation.  They enjoyed spacious rooms in the large two-story farmhouse and delicious homecooked meals created by Ida and Beatrice.  The nearby creek was damned up in summer to create a swimming pool for the guests while Roy and George operated the farm and a small saw mill.

In 1946 Summer Home Farm was sold to the Salvation Army who operated a camp in the summer and allowed the city of San Jose to use it as an outdoor teaching area during the school year.  The camp is still in existence today.  Even though new buildings have been added to expand the camp facilities, the two story house still stands.  And I hope it will still be there when this disastrous fire is put to rest.

The history of Summer Home Farm goes back 161 years when John Bean built the original farm along a creek which he named Bean Creek.  B.C. Brown followed Mr. Bean and purchased 300 acres to be used as a resort for San Francisco tourists.  He created a campground, the large two-story hotel and cozy cottages.  In the summer months, he damned Bean Creek next to the resort to be used for swimming, boating and fishing.  More than just a resort, the property was also operated as a farm with vegetables, orchard fruits, and grape vines.  He also had cattle.

The Bernheim family bought the resort in 1892 and operated it as a farm, and not a resort, for five years until J.H. Haesters took it over and reopened the resort to the public.  Just as Brown had previously done, he combined the resort with farming operations.  The property was sold again in 1900 to a Mr. Hugus and Mr. Haines who continued to operate the resort.  It was during this time that the dining room was expanded, six new cottages and twelve guest rooms were added to the main hotel.

Summer Home Farm survived in forms during the first part of the 19th century.  In 1905,  the resort was leased by the New Thought movement for a summer school and health center for its members and interested visitors. After the leader of the movement died in 1911,  the resort was operated throughout the 1910s.

In 1919, Ron’s grandfather George and Ida Reid arrived from Nevada and took over as proprietors.  Ron’s mother, who had arrived in California through Ellis Island from Asta, Italy when she was five years old, grew up in Bonny Doon.  The Reids hired Beatrice Gai when she was very young to help Ida with cooking and cleaning. She had taught herself to read by watching silent movies and attended Sandhill School located near the farm.  She and the Reid’s only son, Roy, knew each other for 16 years before they were finally married.  Their first child, Donald, was born in 1930 followed by Ronald in 1938.  Roy and George operated the farm while Ida and Beatrice ran the resort.  Roy also operated a small shingle mill where he made shingles and barrel staves.  Roy would meet the train when it arrived in Glenwood from San Francisco with tourists who spent summers at Summer Home Farm.

After running the resort for over twenty years, Reid transferred his lease to the YWCA in 1941 for use as a women’s summer camp, which ran for the next three years. In 1945, the Salvation Army purchased the resort for use as a boys summer camp and renamed it Camp Redwood Glen. The Salvation Army still owns and operates Redwood Glen Camp & Conference Center and the site can be accessed along Bean Creek Road.