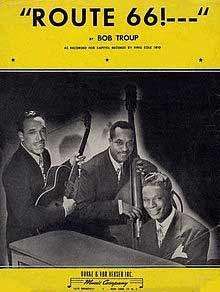 Get Your Kicks on Route 66
The Route 66 Theme Song

During the Second World War, American soldiers traveled across the USA via route 66 as they were sent off to the European or the Pacific battlefields and again when they returned home.

One of these was a Captain Robert Troup, Jr. of the US Marines.

A former drummer with the Tommy Dorsey Band, this aspiring songwriter and music arranger from Pennsylvania was making the trip once again in 1946 with his wife Cynthia. During the long trip, she leaned over and whispered “get your kicks on Route 66.”

The phrase stuck with him. and he penned his now famous song.   In Los Angeles,  he performed the song for Nat King Cole, who made it a hit.

When the last section of the new Interstate 40 was opened in Williams, Arizona, Bobby Troupe was invited to play his famous song in the middle of the road in the opening ceremonies.  A baby grand piano was unloaded in the middle of the highway.  Troupe played and sang while television cameras filmed and traffic was backed up.

If you ever plan to motor west,
Travel my way,
take the highway that’s the best
Get your kicks on Route 66.