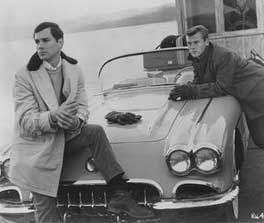 The debut of the television series Route 66 on October 7, 1960 went mostly unnoticed.

Appearing after the second debate between Richard Nixon and John F. Kennedy, it was considered by most as just another adventure serial.

The story begins when Todd’s father dies. The two young drifters, with only a Corvette and no money in their pockets, set out on the road looking for a place to put down roots. During their travels they encounter and tell the stories of various loners, outcasts, and dreamers.

By the end of its four-season run, the Route 66 production caravan had traveled to twenty-five states as well as Toronto, Canada. Guest roles were filled by a wide range of characters ranging from fading stars, like Joan Crawford and Buster Keaton, to newcomers such as Suzanne Pleshette, Robert Duvall, and Robert Redford.

Studio executives argued with the show’s creators that no one would sponsor a show about two “bums.” Of course, Chevrolet proved them wrong.

The early episodes were politically charged and dealt with deep issues that mirrored the problems of the times. The first episode told the story of a wealthy businessman who, learning that his son had been killed in action, murdered two German POWs as his neighbors watched.

CBS executives, concerned about the seriousness of the series and its political undertones, ordered the show’s producer to add more “broads, bosoms, and fun” to the show. The producers eventually conceded to network demands and introduced young female guest stars such as Tuesday Weld and Suzanne Pleshette to provide more romance for Tod and Buzz.

Maharis left the show in 1963 and was replaced by Glen Corbett as Linc, a recently-retuned Vietnam veteran. Viewers never really bonded with the new character and the shows ratings foundered. It was eventually cancelled.
Even though the series is associated with Route 66 the highway, only a few of the episodes were actually filmed in towns along the old highway itself. Nevertheless, it managed to capture the feelings of adventure and wanderlust that the road invokes in people’s minds.

In 1993, a summer series on NBC, put Buz’s illegitimate son at the wheel of the Corvette. He took to the highway with a forgettable partner in the passenger seat. The new Route 66 only lasted a few weeks but it led to other TV series based on the wandering Samaritan doing good on his travels.

Share on TwitterShare on FacebookShare on PinterestShare on LinkedInShare on Email