“Life is too short for bad coffee or tea!”
Water is the world’s most popular beverage. TEA is second and COFFEE.
We have just the gifts for that coffee or tea lover.
Our coffee and tea gift baskets and unique gifts contain the finest gourmet coffees and teas that we could find.
Of course, we haven’t forgotten the goodies to go with that hot cup of coffee or tea. 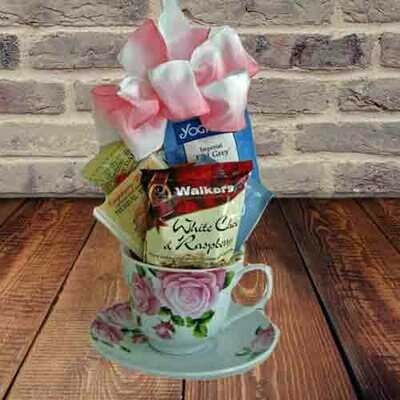 Read about How Used Coffee Grounds Have Value

Some facts about Tea

Legend says that tea was discovered almost 5,000 years ago by a Chinese emperor when some leaves from a plant nearby accidentally blew into a pot of boiling water.  By the 1600s, tea was a popular beverage in Europe and played a major role in the famous Boston Tea Party in the American colonies  In 1904, iced tea was created at the St. Louis World Fair.  Four years later, a New Yorker introduced tea in a bag.

English tea is not grown in England because the climate is not right for growing tea plants.

Tea should be stored in a tightly closed container, out of the light.  It should not be stored in the freezer or with strong smelling foods as it absorbs smells.

Green tea and black tea both come from the same species, Camelia Sinesis.  Green tea is made by briefly cooking the fresh tea using steam or dry heat.  This process locks in the green colors and flavors.  For black tea, the tea leaves are left outside until it becomes limp.  It is then put into machines which crush the leaves. The damaged leaves gradually change color from green to brown and then black.

Although there is only one tea plant, camelia sinesis, there are many varieties, just like grapes.  Other factors that influence the flavor and quality include the growing conditions, age of the plant and the processing after the tea is picked.

Flavored black teas infused with flower and fruit blossoms, such as jasmine, ginger, lemon and almond add variety to your tea table. Earl Grey, probably the most famous flavored tea, is black tea with oil of bergamot, which gives the tea an orange-like aroma and taste. There are countless other flavors.